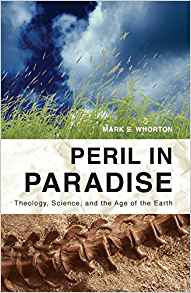 Mark Whorton is a NASA engineer who is also an old-earth creationist (OEC). Peril in Paradise is a cordial attempt to persuade young-earth creationists (YEC) that an inerrant, divinely inspired Scripture is fully compatible with an old earth. Like YEC’s, Whorton rejects evolution, thought he doesn’t focus much on that, nor on the science of the age of the Earth. He primarily focuses on two theological paradigms of creation that technically don’t have anything to do with the age of the Earth, contrasting the “Perfect Paradise Paradigm” (which doesn’t allow for an old earth) with his “Perfect Purpose Paradigm” (which does).

Was the garden perfect? Whorton notes that the “idyllic view of Eden is derived more from the biblical description of the end times than the beginning,” even though “the Master’s plan culminates with a better future than the past has been.”

There’s a “common notion that the entire earth was like the garden of Eden,” yet “the Scriptures indicate that the garden was unique location not necessarily like the rest of the Earth.” Furthermore, even in this specially protected place, “the necessity of cultivating the garden implies that the garden was in need of maintenance.” Whorton points to other examples of the Hebrew meod tob (“very good”), arguing that “neither Rebekah nor the Promised Land was perfect in every way, but both were exactly right for the purpose” God had given them.

Whorton argues that the curse of Genesis 3 is “very specific and focused in scope,” unlike the “blank check” of the Perfect Purpose Paradigm, which “envisions a radically different world that fails the test of consistency and credibility on both theological and practical grounds.” Whorton describes several of these radical differences and argues that YEC explanations fall short, including the need for “an unimaginably rapid” “theistic hyper-evolution,” in which “one can only wonder how the excessively rich gene pool generated entirely new plant and animal species immediately after the flood, but shortly thereafter the species became fixed, vulnerable to change, and susceptible to extinction.”

Many species alive today are especially well suited to present-day ecologies but would have been unfit for the Perfect Paradise… Many who use Bomby [the bombardier beetle] to argue for design in creation fail to recognize the inherent contradiction with their creation paradigm. This attribute of design is meaningful only in the context of a need for defense.

Additionally, “the Creator takes credit” in Job and the Psalms “for creating the very things that are not permitted by that paradigm,” including stormy weather and predatory animals. Whorton interprets the “decree that will not pass away” (Ps. 148) as a “biblical statement that the laws of nature have never changed.” He also critiques the idea that the curse corrupts scientific observation with passages to argue that “the revelation in nature is as perfect as the Law of the Lord (else how could men be “without excuse”?)

Responding to claims that, by allowing millions of years of death and suffering, God’s character is incompatible with an old earth:

Job’s friends erred when they relentlessly tried to persuade him about what God would or would not do… Young earth creationists – indeed all Christians – should heed this warning when they speak definitively about how God must conduct himself.

Many young-earth creationists mistakenly think that old-earth creationists (or theistic evolutionists) reject their interpretation of Genesis due to a fundamental rejection of miracles. Whorton explains: “Both creation camps agree that God has the power to do as He chooses. What separates the two views is not what God is able to do but what God actually did.”

The Cosmic Scope of God’s Purposes

Interestingly, the book has more to do with theodicy than the Garden of Eden. As Whorton unlinks suffering from Adam’s fall, he defends not simply pre-Fall animal suffering, but suffering in general, especially present human suffering, with an emphasis on the sovereignty of God and his purposes to glorify himself through creation rather than an “egocentric” focus on humanity:

God had a higher purpose than merely to fellowship with man in a pristine and blissful garden paradise. Rather than the egocentric perspective that God’s purpose was our enjoyment, the more cosmic scope of this paradigm properly focuses on the ultimate end of creation which is the glory of God. This eternal perspective accounts for the fuller meaning of the cross where Christ dealt not only with the sin of man but also with the rebellion of Satan. In the economy of the Creator’s eternal plan, what began before time will end with the consummation of His kingdom and the demonstration of His glory to all creation for all eternity.

While “the young earth creationist paradigm tends to neglect the significance of Satan’s fall,” Whorton builds a case through Colossians, Revelation, John, and Ephesians that Christ’s atonement had a “cosmic scope” in a plan that “extends beyond the rebellion of His creation to the ultimate realization of His eternal purpose through His creation.”

How Suffering Fits Into God’s Purposes

Whorton describes the Israelite slavery in Egypt as an example of God’s perfect purposes. Unlike “later periods of captivity” which “were always a judgment for their lack of faithfulness,” “the children of Israel were in Egypt solely because of God’s plan.” Through the Exodus, “He demonstrated previously unrevealed aspects of His person,” and through the plagues “not only was God delivering His people and showing His power, He was also executing judgment on the spiritual rulers behind this evil, earthly kingdom.” In conclusion:

Like Pharaoh, Satan was empowered after his rebellion for the very purpose of demonstrating God’s glory… Like Pharaoh, Satan’s judgment was deferred, and instead God raised him up… that His name would be proclaimed throughout the heavens and the earth.

Whorton says the Bible “emphasizes the outworking of God’s eternal plan rather than the temporal good of the individual,” agreeing with Aquinas that “this world is not necessarily the best of all possible worlds, but it is the best way to the best possible world.” 1 Peter 4 shows how “God permits suffering” for his “glory” that we “will also share.” Whorton claims that “the Perfect Paradise Paradigm views suffering in light of the past,” while “the Perfect Purpose Paradigm sees suffering in light of the future.”

The cross is the ultimate rebuttal against the claim that a loving God would prevent all suffering and evil. The same God who chose not to prevent suffering and evil did a greater thing – He entered creation and overcame evil through His own suffering.

Furthermore, “God’s promise to abide with us during suffering is an indication that we are partners in His unchanging, eternal plan.”

Whorton believes the “two books” of nature and Scripture can be reconciled. “With one consistent story, the heavens tell of His glory (Psalm 19:1-2) and the Scriptures tell of His Son (John 5:39).”

One thought on “Peril In Paradise by Mark Whorton (2005)”

Just a guy who likes to read and think about Scripture and nature. See Creation Explore for educational resources and reviews of mainstream science videos from a Christian perspective.

God’s Goodness Over Millions of Years? An Introduction to Old-Earth Theology

God And Aliens And Outer Space: Are We Still Special In the Universe?